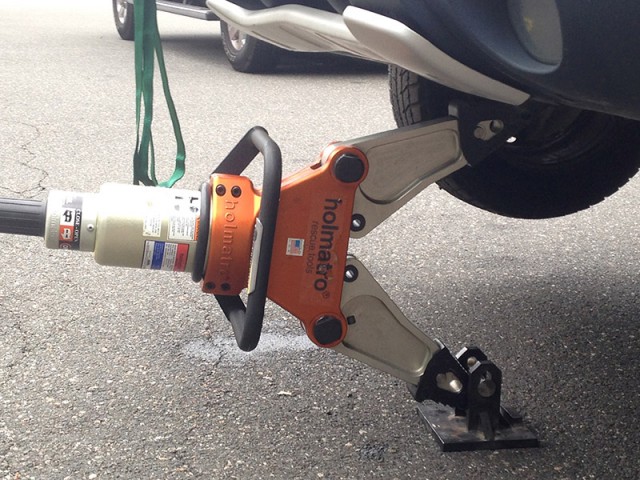 For many years there has been longstanding controversy regarding the use of the hydraulic spreader vertically as a jack to lift a vehicle in order to free a victim trapped beneath. Much of the negativity stems from the now infamous YouTube video where a vehicle shifts during lift and is dropped onto a victim beneath a car. I'm not going to dissect that video and point out the myriad of things not done to prevent this from occurring. What I am going to say is that when done correctly in conjunction with proper stabilization & load capture this can be a very quick & effective way to lift a vehicle. Many of the major H.R.T. manufacturers will go on the record stating they do not endorse this technique because the tool "was not designed to be used that way" My contention to them is that it is no different than jacking the dash during a modified dash lift. The tool is used in the same vertical plane during both maneuvers.

The main issue with using a hydraulic spreader to lift is limited contact surface area. The widest tips on the market are just over 2 inches wide. This limits contact to the load, as well as the ground to a very small area.  In fact, as the load begins to raise and the tool opens up the contact surface begins to lessen making things less stabil.  In analyzing this we sought to devise a way to increase both contact surface area & lateral support in order to improve overall stability when conducting a lift in this manner.  After much testing & great deal of trial and error we have developed a product to use in conjunction with your H.R.T. and proper cribbing to perform this lift with a great deal of stability.

Behold the TL-9 stabilization device. The TL-9 is made from half inch solid steel, with a 6 x 6 base plate, and 4 1/2 inch gusseted towers spaced approximately 2 inches apart. The solid base plate increases the contact surface area with the ground while the towers provide lateral support for the tool. In addition, there is a solid steel traveling limit pin between the towers that prevents the spreaders from opening beyond 70%. At 70%, lift heights have ranged between 19-30 inches depending on the H.R.T. unit.  When the traveling pin reaches the tops of the towers it locks the lower tip of the spreader into a groove at the front of the plate which works to increase overall stability.

The TL-9 is in the production process and should be available by mid to late September. There will be 3 stock models produced to accommodate the vast majority of commercially available spreaders. Each stock model will have slight variances in the width between the towers to account for different spreader tip widths. Each model will allow for only a 1/8 inch of clearance when the tips are inserted to achieve maximum lateral stabilization. Custom models can be produced to fit a specific spreader with bulk orders in excess of 10 units where tolerances can be set to within a sixteenth of an inch.

By accepting you will be accessing a service provided by a third-party external to https://ctcustomfiretraining.com/