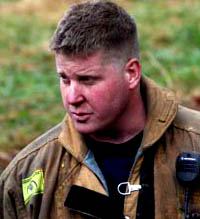 Paul has been a member of the fire service for more than 20 years in both the career and volunteer ranks. He started his career as a volunteer in 1990 in Stamford C.T. He is also a 20 year veteran of the Fire Department of New York (FDNY), where he is assigned to Ladder Company 28 in Harlem. DeBartolomeo is a nationally certified Pro-Board instructor, as well as an adjunct instructor for the Connecticut Fire Academy and provides lectures and hands-on training nationwide. DeBartolomeo has been featured in Fire Engineering’s Training Minutes video series, was a lead instructor for an F.D.I.C. H.O.T. class, was an F.D.I.C. classroom presenter, and is a contributing author for Fire Rescue Magazine. 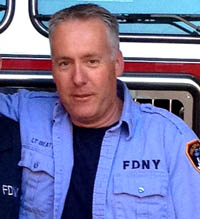 Matt is a 21 year veteran of the F.D.N.Y. assigned to Ladder 56 in the Bronx. Prior to his promotion Matt was assigned to Ladder Company 103 in Brooklyn, & later transferred to Rescue Company 1 in Manhattan. LT. Beatty is also an instructor at the FDNY Bureau of Training working in tactical training & the technical rescue school. Matt is also an adjunct instructor for the CT Fire Academy, and was a H.O.T. instructor at the Firehouse Expo teaching forcible entry & heavy vehicle rescue. 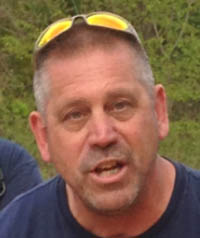 Tony has been a member of the fire service for nearly 40 years. He began as a volunteer in Clinton CT in 1977, and joined the Airforce in 1982 as an Airforce Rescue Firefighter. Tony served both actively, and as a reservist for 10 years and attended several military firefighting courses. Leca was hired as a career firefighter by the City of Waterbury CT. in 1988, and was a charter member of the heavy rescue, serving more than 20 years as both a firefighter & Lieutenant in R-9. In 2012 Leca was promoted to Captain and was assigned to Ladder Company 2. Leca retired from Waterbury after 25 years, and currently works in West Hartford assigned to quint 3. He has been an adjunct instructor with the CT Fire Academy since 1997 teaching numerous firefighting courses, and specializing in various technical rescue disciplines. 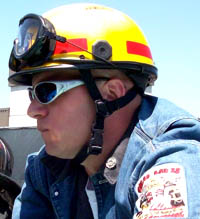 Ed has over 25 years as a firefighter serving both in Connecticut & New York. He started his career as a volunteer in East Haven CT, and was later hired as a career firefighter with the Milford Fire Department. In 1997 Ed was appointed to the F.D.N.Y. and was assigned to Ladder Co. 28 in Harlem where he served for 9 years. In 2008 Burwell was promoted to the rank of Lieutenant and is currently assigned to Ladder Co. 19 in the South Bronx. LT Burwell has also been assigned to the F.D.N.Y. Division of Training where he helped develop, and instructed department members in the use of the P.S.S. system. Ed is also an adjunct instructor for the CT Fire Academy where he has served for more than 20 years. LT Burwell has traveled throughout the country teaching various subjects as a H.O.T. Instructor at Fire House Expo, F.D.I.C. International, and Fire Rescue Magazine. 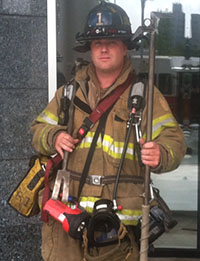 Mark began his fire service career as a volunteer at Glenbrook Fire Department in Stamford CT in July of 1986. In 2002 he was hired as a career firefighter by The City of Stamford Connecticut where he is assigned to Rescue Company 1. Mark is a Nationally Certified Fire Instructor, Fire Officer, and Safety Officer and holds several other certifications in various disciplines. He was published in Fire Engineering Magazine and worked on a video series for Fire Engineering’s Training Minutes. 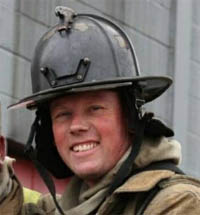 Jim has been a member of the fire service since 1994 when he joined the fire department in Cheshire (CT) as a volunteer.  In 2001 Jim began his career with the Bristol (CT) fire department, where he currently serves as the Captain of Tower 1.  He is also an adjunct instructor with the Connecticut Fire Academy and the Wolcott State Fire School.  Jim also serves as a Subject Matter Expert for the NFPA in the development and delivery of training materials related to alternative fueled vehicles and energy storage systems. 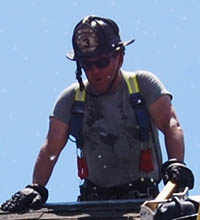 Ted started his career in the fire service in 1987 with the Hartford (CT) Fire Department. In 1989 he was assigned to the Tactical Rescue unit as a firefighter and later went on to become an assigned driver of the T.A.C. He was promoted to the rank L.T. in 1998, and achieved the rank of Captain in 2007, where he commanded Ladder Co. 3 in the cities North End. In the fall of 2015 Ted was promoted to the rank of Deputy Chief assigned to District 2 in the cities North End. In addition to his fire service career, Ted has served as an adjunct instructor with the CT Fire Academy since 2001 teaching in various disciplines including Recruit Firefighter, Technical Rescue Programs, and Fire Officer Programs. 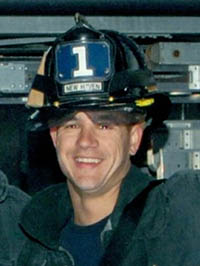 Tim began his fire service career in 1996 as a volunteer in South Windsor CT. In 2005 Tim joined the CT National Guard as a firefighter, where he received certification in numerous training classes. In 2008 he was hired by the City of New Haven (CT) Fire Department where he was assigned to Engine 10 prior to his transfer to Squad Co. 1. Tim was promoted to the rank of Lieutenant in 2015, assigned to Engine Co. 8, and has since been promoted to Captain and is assigned to Squad Co. 1. He is a certified Fire Service Instructor, Fire Officer, and a Hazardous Materials Technician. 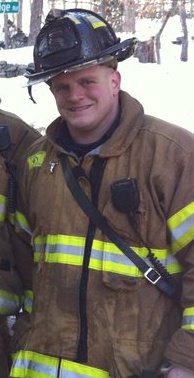 Joe has been a member of the fire service since 1997 staring as a volunteer with Rowayton Hose Company no. 1. In 2004 he began his career as a firefighter with the Stamford (CT) Fire Department and was assigned to Rescue co. 1 and Engine co. 5. Dombrowski was promoted to Lieutenant in 2012 and assigned to Truck co. 1 and Engine co. 1 and in 2017, was reassigned to Rescue co. 1. He is a nationally certified Pro Board instructor, an adjunct instructor for the CT Fire Academy, and a lead instructor with the Stamford Regional Fire School. Joe holds many state and national certifications including Officer, Safety Officer, Pump/Aerial Operator, Rescue Technician and other disciplines. Dombrowski also sits on Stamford's Apparatus and High rise committees. 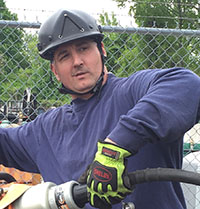 Has been a career firefighter for over 24 years, first federally at the Groton Sub Base, and currently with the City of New London CT. Russ is a certified Fire service instructor with over 22 years of teaching experience at State Regional Schools and as an Adjunct Instructor at the CT Fire Academy. Russ is also employed by Shippmans Fire Equipment where he serves as the Holmatro and Paratech Technician for Service, Repair, and Training in the states of Connecticut & Rhode Island. Russell is a Certified Fire Instructor 3, Fire Officer 2, 1403 Live Fire Instructor and Health & Safety Officer, and specializes in Rope Training, Trench Rescue, Confined Space, Vehicle Level 1 & 2 and Machinery Technician. 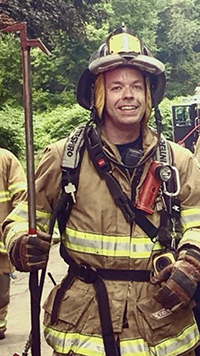 Zak has been a part of the fire service since 2001, starting his career with the Warehouse Point Fire Department in East Windsor, CT as a volunteer. In 2006 he joined the Air National Guard as a firefighter, and currently serves as Assistant Chief of Training. During his military career he has deployed numerous times, and trained across the world. In 2009 Zak was hired by the City of Milford (CT) Fire Department, he is currently assigned to Squad 1 as a Firefighter. He is also an adjunct instructor with the Connecticut Fire Academy. Zak is a certified fire officer, fire instructor and holds several rescue and hazmat certifications. 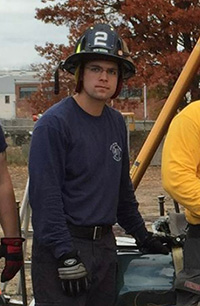 Eric has been a member of the fire service since 2004, starting as a volunteer, since 2009 he has been enlisted in the Air National Guard as a Fire Fighter, where he currently still serves and has had the opportunity to work with fire fighters world wide.  In 2012 Eric was hired by the Bradley Int. Airport Fire Department before being appointed to the City of New Haven Fire Department in 2014.  He is currently assigned to Squad Company 2 in the West Battalion.  Eric holds many state and national certifications, including Fire Officer 1, Fire Instructor 2, Pump/Aerial Operator, and numerous rescue certifications to include Rope Tech ½, Trench, Confined Space, Structural Collapse and Vehicle Tech ½. 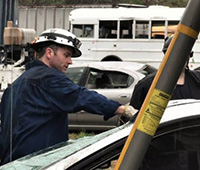 Clint is a Captain with the Guilford Fire Department in Connecticut, where he has served since 2002.   He is a nationally certified Fire Service Instructor III, and a rescue squad officer for the DHS/FEMA US&R Program currently assigned to Massachusetts Task Force 1. Clint is also an adjunct instructor for the Connecticut Fire Academy, teaching in the recruit firefighter and technical rescue disciplines. 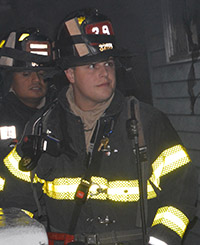 Steven began his fire service career in 2005 by joining the Brewster Volunteer Fire Department in Brewster NY. In 2007 Stephen was appointed to FDNY EMS where he rose to the rank of Paramedic, and in 2013 he transferred from EMS to Fire Suppression within the FDNY. Miller is currently assigned to Hook & Ladder Co. 39 in the Woodlawn section of the Bronx. Stephen has also maintained an active role in the Brewster Fire Dept. rising to the rank of Rescue Captain, as well as serving as the departments Training Officer. 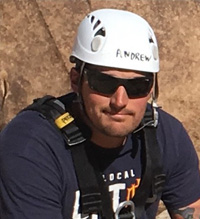 Andrew started his fire service career in 1999 as a volunteer in East Granby, CT. Continuing in the tradition of his grandfather, father, and uncle he began his professional career in 2006 when he was hired by the City of Norwich, CT. In 2008 he was hired by the City of Hartford Connecticut and assigned to Ladder Co. 3. He was promoted to Lieutenant in 2015 and was assigned to Engine Co. 2. In 2019 Andrew was promoted to Captain, and currently serves as the Captain of the Department Drill School where he and other instructors coordinate department wide training for over 350 personnel. Andrew holds an Associate’s Degree in Fire Technology and Administration from Capital Community College, is an EMT, and is a certified Fire Instructor III and Fire Officer III. He also holds technician level certification in Haz-Mat, Rope Rescue, VMR, Swift Water, Trench, and Confined Space. Andrew is also an apprentice instructor for the Peak Rescue Institute in Washington State and serves as a Technical Advisor for Sterling Rope. 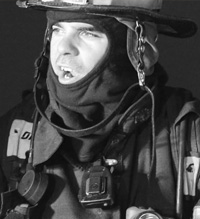 Bob began his fire service career in 2006 as a volunteer with the Noroton Fire Department in Darien, CT. In 2011, he was hired by the City of Milford (CT) Fire Department where he is currently assigned as a Lieutenant on Engine 7. He holds a Bachelor’s Degree in Fire Science from the University of New Haven, and is a certified Fire Service Instructor, Fire Officer, and holds several rescue and hazmat certifications. 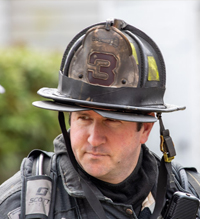 John began his fire service career in 1995 as a volunteer in Glastonbury, CT. In 2008 John was hired by the Hartford Fire Dept. where he was assigned to Ladder Co. 3. In 2016 John was promoted to the rank of Lieutenant and assigned to Engine Co. 5. One year later he was reassigned back to Ladder Co. 3. John has assisted in the instruction of multiple HFD recruit classes and is a certified Fire Service Instructor, Fire Officer, Aerial Operator, and a Hazardous Materials Technician.